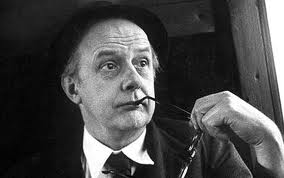 John Betjeman was a British poet, journalist, broadcaster, film critic, and architecture enthusiast.  In the 1930's, he coauthored a series of travel guides (underwritten by Shell Oil) to Great Britain.  In 1939, he was rejected from active military duty but soon began work helping to make films for the British ministry of information.  In 1941, he was appointed press attache to the British Embassy in Dublin, where rumor has it he was involved in gathering intelligence for the British government and was targeted for assassination by the IRA. Betjeman had published four books of verse by the end of the war.

That's what we know.

What Really Happened was Betjeman, with his knowledge of propaganda, was sent to Ireland to run a counter-intelligence ring against Ahnenerbe agents.  The Ahnenerbe showed considerable interest in Ireland, due to the presence of both Norse/Ayran artifacts left from the Viking raids and the older relics of the Tuatha de Danann.  Rumors persist of Ahnenerbe agents trying to summon Balor of the Evil Eye in an attempt to overrun Ireland and use it as a base for an invasion of England and to strike at trans-atlantic shipping.