A week or so ago, I posted a small factoid about Tolkien's almost-involvement in WW2 code breaking.  it inspired a number of comments and fun discussion.  I'm also slowly but surely developing some material for an alt-history World War Two game I'd like to run.  In that vein, I'm going to keep looking for some real history bits that, if tweaked ever so slightly, could be dropped into a pulp or WW2 game.  I didn't have to do much tweaking for today's entry. 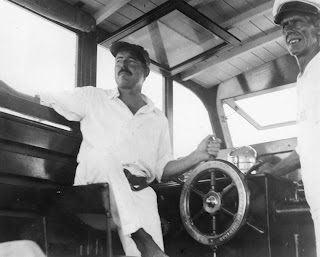 That's author Ernest Hemmingway, with his Cuban fishing buddy  and guide Carlos Gutierrez aboard Hemmingway's boat, Pilar, in 1934.  Hemmingway lived in Cuba for much of the 1930's and 1940's.  When America entered WW2, President Roosevelt asked for volunteers to patrol the Gulf and Atlantic Coasts, looking for German U-Boats.  Papa Hemmingway joined up, but set out to do a little more than just spot submarines.  He stocked up the Pilar with a Thompson machine gun and a bunch of hand grenades and went looking for Nazis.  Of course, he never found any, because if he had, he probably would have ended up at the bottom of the Gulf of Mexico.  Hemmingway was awesome, but even his Tommy gun isn't going to do much against a U-Boat.
Unless, of course, he was armed with some experimental weaponry.  Using his own brute force and cunning, perhaps Hemmingway was the sole reason Cuba did not fall into Nazi hands and used as a staging ground for their inevitable invasion of the U.S!  Aided by deciphered codes from a British source known alternately as J., Ronald, or Ruel, Hemmingway was able to track down and sink no less than four U-Boats almost single-handed.
Labels: alt-history Hemmingway WW2