Caching the Anniversary (Apologies to Winston) 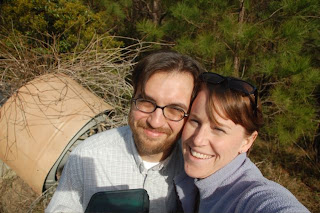 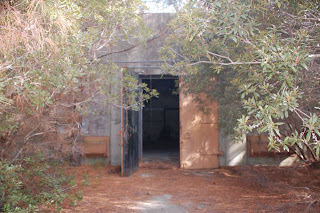 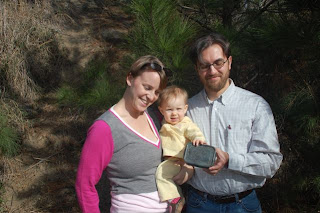 This past weekend, Sarah and I went to visit my brother and other family in Myrtle Beach and Conway. They were the only set of family I hadn't seen over the holidays, so we wanted to check in with them before the semester started again.

Saturday was also our 6th wedding anniversary and it proved to be a very fun one. My brother and his wife have gotten into Geocaching; he wanted to take us out Saturday morning to show us how it all worked. Saturday was warm and beautiful; a perfect day to try out something new.

I had heard of Geocaching before, but hadn't been to interested. Winston and I had a conversation about the hobby last time we saw each other back in May. I was skeptical of the whole thing. The trespassing and generally tromping all over someone else's property that I had heard about didn't sit well, but fundamentally I thought the whole "find a little hidden box" thing was a little silly. It actually distracted from the general activity of hiking or walking around and looking at stuff.

After our brief morning of geocaching, I will freely admit that I was wrong, wrong, wrong. We had a ton of fun, especially once I realized that the point of geocaching wasn't finding the cache at all. For some people, it clearly is. They keep score by finding lots and lots of caches. They take pride in being the FTF (First to Find) a new cache. I certainly don't want to disparage anyone's reasons for participating in a hobby, but for me, the attraction of caching has less to to with the finding than the looking.

Originally, I was skeptical because I thought looking for the little box was just a poor excise to get people out and about. The truth was, I was overestimating my own motivation. People (me) NEED an excuse to get out and about. There is no way I would just wander around looking at new stuff on my own. Geocaching gives some direction and motivation to the wandering. It gives one a reason to meander. Personally, I need that reason, because it's too easy to just sit around otherwise. Would I have ever ventured onto the back paths of the old air force base and found those bunkers? Not in a million years.

Another cool element was those caches had been placed by an old friend of mine, who my brother discovered was into caching. I haven't spoken to this guy in a while, but tracking down these little boxes made me feel like we were taking part in a shared activity.

In addition to the caching, Sarah and I also left Eleanor with my mom and brother to have a less focused meander along the marsh walk in Murrell's Inlet, which led us to the Divine Fish House for a nice dinner. The six years Sarah and I have been married have been wonderful. Sure, we've had fights and down times, but those pale in comparison to the good ones. I cannot imagine life without my partner.
Labels: family food friends travel