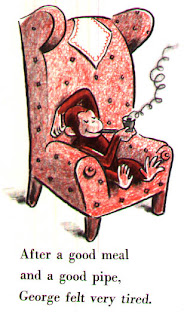 I haven't written any of my Weird War 2 profiles in awhile, but back in May, the family and I made a detour on a family trip to Norfolk, Virginia and the Chrysler Museum's hosting of "Curious George Saves the Day", and exhibition of original artwork and memorabelia of H.A. and Margaret Rey.  The exhibit was great; I had no idea about the interesting lives of the Rey's, including a cross-country bycyle trek to escape the Nazi occupation of Paris.  Thus. . .

They Rey's, H.A. and Margaret, are best known as the creators of Curious George.  All told, they published seven Curious George books, not counting the monkey's orginial appearance in Cecily G. and the Nine Monkeys.  Although the families of the two were acquainted in Hamburrg, Germany, they met and were married in Brazil.  There, H.A. Rey was selling bathtubs and sinks along the Amazon.  They headed for Paris in 1936.  There, they soon became concerned about the Nazi threat, as both were Jews.  In 1940, as the Germans marched on paris, Hans hastily cobbled together two bicycles from spare parts; the two rode from the city two days before the Germans entered.  Their flight had them ride 75 miles in three days, take a train to Lisbon, then sail back to Brazil, then onto New York.  Curious George was published in 1941, with six more books to follow.  Rey also published a new cartoon-ish guide to the constelations in 1952 titled The Stars: A New Way to See Them.

For a Wierd War 2 game, this is all too good to pass up.  The PC's may be called upon to help the Reys escape Paris.  Why?  During his time in the Amazon, Hans Rey undoubtedly stumbled upon some secret in the rain forest.  Perhaps it was a secret Nazi hideout (a staging area for Nazi space opperations!) or an ancient astrological clock.  They Rey's didn't know what to make of it at first, but their art backgroud and collaboration led them to unlocking the secret several years later in France.  They immediately became targets for the Abwehr and escaped, brought to the U.S., where their knowledge of crypto-astronomy became central to the covert war effort.
Labels: Weird War 2