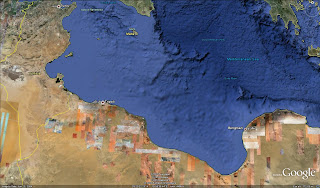 One of the cool things about this setting project is how much I am learning about actual history and geography.  The book I am currently reading, which I'll fully discuss once I've completed a bit more of it, is set largely in North Africa.  In my Western-centric mind, I'd had the tacit assumption that the North African coast was fairly straight and constant-- running from Morocco to Egypt with only minimal variation in latitude and, thus, climate, vegetation, etc.  Boy, was I wrong.

As the Google Earth pic above shows, there is substantial (something like 700 miles) north-south difference between Tunis and the southern-most point of the Mediterranean's dip into Libya.  This dip thrusts the Med right into the winds and other climatological conditions that make the Sahara.  That means that, in Libya, the desert comes right to the ocean, whereas further west (which is also more northerly), there's a not-insignificant strip of fertile coastal plain where the Mediterranean and Africa meet.  This is easy to see in Google Earth.

I'm a bit embarrassed to admit that I didn't realize that.

Gaming-wise, this could mean that there are substantial cultural differences between more westerly Africa and where the desert meets the sea.  It could also mean there's significant travel risk heading south and east from my version of Tunis, through the desert -- bandits, giant scorpions, simple dehydration, etc.