Solo Gaming With Wrath of Ashardalon

It's solo gaming month and, like most of us, I don't game as much as I'd like.  So I thought I'd make an effort to engage in some solo gaming before the month was over.  An easy option was available right in my closet -- The Wrath of Ashardalon board game from Wizards of the Coast.  Though I have played the game before, I did it with some friends.  We skipped over the first scenario, as it was designed for one player.  Last night, the wife was out with some friends, so I grabbed the box after I put the kids to bed and started the solo adventure.

I chose the dwarf fighter.  I remembered being poisoned a lot in our previous Ashardalon game, so the dwarf's +5 to poison saves looked appealing.  The solo scenario is, essentially, "you fall down a hole into a dungeon and try to find your way out."  That's, well, as ridiculous as it sounds.  Do we even need an "in-game rationale" for these sorts of scenarios, especially when the victory conditions always involve killing the monster at the end?

I laid things out -- no easy task given all the cards, miniatures, tiles, jots, tittles, and whogangs present in these board games -- and got started.  Things soon went south.

The thing I both love and hate about these recent WOTC board games is that something happens every turn. Either you place a new tile, which brings out a new monster, or you draw an encounter, which is always Bad.  More monsters, traps, walls turning into magma -- these are all encounters.  It keeps the action flowing, but it also makes it really easy to become overrun, especially when you're playing solo.  In no time at all I was darting from tile to tile, trying to whittle down the existing horde of monsters and praying the encounter cards I drew didn't cause a block of stone to fall on my dwarf's head.  (It didn't, but the walls did turn to magma).  Finally, I arrived at this (sorry about the blurry cell phone pic): 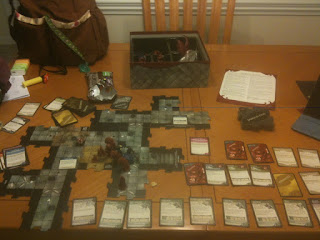 That's the end board, complete with the staircase exit from the dungeon.  Notice all of my daily powers are expended (face down there on the right) and the long line of monster cards at the edge of the table.

And then this happened: 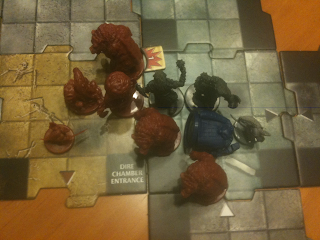 That's my poor dwarf, dead a midst the no doubt gleeful throng of monsters that did her in.  If you're counting, that's a kobold Villian, two Orc Smashers, a Grell, a Gibbering Mouther, a kobold skirmisher, and three (yes, three!) frakking cave bears.  My only solace was that the cave bears likely ate all the other monsters once my dwarf died.

I died and was disappointed.  I also cursed more in this game that I have in a long time; it's a good thing my kids were in bed.  (Example: "Another &#^#% cave bear?!  You've got to be *&^%# kidding me!. I am so @#$%#*.  One thing I will say about these D&D board games is that, every time I've ever played one (three times now), it's come down to the wire.  The design, while occasionally frustrating, seems to eliminate the forgone outcome.  Though I died in the dungeon this time (will my poor dwarf's parents ever know what happened to her?), I had a good hour and a half of solo gaming.