I am probably not alone in the fact that my entry into gaming roughly coincided with my discovery of Tolkien.  Both happened in the 6th grade for me, as I discovered The Hobbit on my English teacher's bookshelf and Ricky Terzo started telling me about Dungeons and Dragons.  That has certainly colored my interpretations of game elements; it's very hard for me to read the halfling description in the Mentzer red box without thinking it's all about Bilbo.

The halfling's abilities seemingly come from being small.  They get a substantial chance to hide (90% in the woods, 2 in 6 in the dungeon)(1).  They have a bonus to their Armor Class against larger opponents (larger than man-sized, anyway).  These abilities make me think of Bilbo, always unnoticed, sneaking around in the elf-palace, hiding from the spiders, or going unnoticed in the Battle of the Five Armies.(2)  Halflings also receive a bonus to initiative and are good with missile weapons.  To me, this sounds like Bilbo throwing rocks at the spiders. 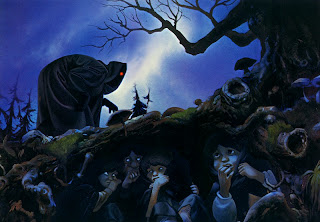 Then, there's the personality and implied setting material given in the description: "They are outgoing but not unusually brave, seeking out treasure to obtain the comforts of home, which they so dearly love.  Halflings are woodland folk, and usually get along well with elves" (p47).  Hello Bag End!  This sentence seems lifted from the first chapter of The Hobbit.  I can see some halfling looking in his larder and noticing that he's running a bit low on good cheese and decent wine.  He then strolls down to the local inn and talks some burly fighter and itinerant cleric into a venture into the local megadungeon of death, mainly so he can find coin to buy a jar of gourmet mustard and new wool slippers.

It's ridiculous, in a way.  It's also endearing and funny, with plenty of possibility for character personality.

The picture of the halfling helps this perception.  It's an Easley drawing of a halfling and and elf in a misty wood.  While they are "posing for the camera," we still get a good sense of what each of these people is about.  The elf is of indeterminate sex, with flowing blond hair and a serious look on his? face.  The halfling, meanwhile, has a scared or surprised expression.  His belly hangs over his belt; he clearly has not missed many second breakfasts.

(1)Which makes me wonder how or if the hide in the woods ability ever got used, given the basic rules focus exclusively on dungeon exploration.
(2) I know he had a magic ring to help him here.  But Bilbo (and, later, the other hobbits) always seemed good at hiding; indeed, it was expected of them.
Labels: BECMI halflings Mentzer