Or what happens when you look at a textbook from 1917.

I was forced to rapidly pack up and move my office today.  It was for good reasons (a promotion), but I thought I'd have a couple of weeks to leisurely move a box at a time.  According to the painters, however, I had to get out today.

In a rush of packing, I not only recycled a ton of paper (and thought of a nice post about going paperless!) but also came across some books I'd forgotten about.  One of these books was given to me by my father, who retrieved in from my grandparent's house when things were being sorted out after both grandparents had passed away.  It's my grandmother's geography textbook, printed in 1917 -- Maury's New Elements Geography, South Carolina Edition.


This book is fascinating, showing us what the average American student was taught about the rest of the world in the early 20th Century and showing what at least some of the world was like in the 1910's. 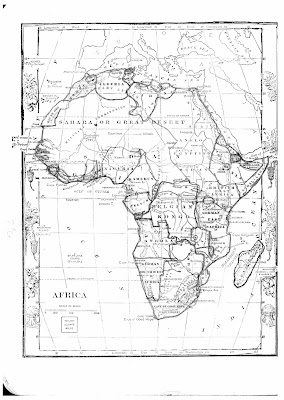 I know the scan is hard to read, but it features places like "Belgian Kongo", "British East Africa" and "Rhodesia."

Speaking of Africa: "most of the natives are savages.  Many of them used to be constantly fighting and making slaves of one another.  European nations are stopping this."  Umm. . .

Did you know that Damascus (which is near Africa) "is the oldest city in the world.  It looks beautiful at a distance."  Too bad it is actually "dirty and ruinous."

And there is the chapter on "Races of Men."  You know what's coming here.  I'll stay away from the really cringe-worthy stuff and go to the classifications of civilization, from lowest to highest:

1.  Savages
2.  Barbarous (they can at least grow crops!)
3.  "We will now visit some people who live very much better than the barbarous people.  They are the Chinese, who go to bed at about the time we arise."  They, by the way, are half civilized.
4.  Of course, we white people are enlightened.  Go us!

And, of course, "many Mohammedans are but half-civilized".  Hindus don't even rank as a full religion and are simply lumped in with all the other pagans.  Come to think of it, that's pretty cringe-worthy, too.

When I think about it as a gaming resource, it makes much of the stuff in it a little less scary.  The book is a perfect background for the haughty colonialist in your next 1920's pulp game.  The starched shirt British officer, dedicated to moving the native peoples of the Empire up the scale of civilization: "Dammit, Johnson!  If we could just gets these barbarous people out of their tents and into real buildings, we could at least get them half-civilized!  Make them quarry more stone.  And go ahead and smash their pagan idols while you're at it.  I am sure all that talk of a curse is just rubbish!"

And, of course, Cthulhu eats the enlightened and the barbarous alike. :)
Labels: history