Apparently, I have been to Gerasa. 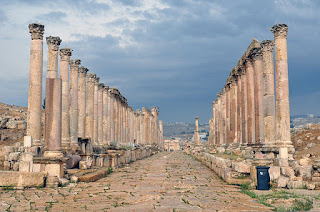 
File this one under “Nakia is an idiot.” Also acceptable would be “Really cool stuff Nakia has done and now he’s old and can’t remember”

Last post was some reflection on the miracles of Jesus, with special attention paid to the Gerasene Demoniac.

As it turns out, I have been to Gerasa. I have walked “amongst the tombs”.

And I kinda forgot.

Well, not really forgot I went to a place. Just forgot that the place I went used to be named Gerasa. Let me explain.

When reading The Gospel of Mark last week as I was thinking about my post, I noted that the Demoniac spread the good news of Christ in “the Decapolis”. I assumed that the decapolis was just a space in the city, like a market, utterly forgetting that “decapolis” literally means “ten cities.” But I wanted to be sure, so I did what any of my students would do -- looked it up in Wikipedia.

Turns out that the Decapolis was a loosely affiliated group of 10 Greco-Roman cities, including the present day city of Damascus, that are now in present day Syria and Jordan.

Gerasa is now known as Jerash and is in Jordan. Guess who got to go to Jerash on a foreign study trip to the Middle East and Africa in 1996?

I remember visiting Jerash. Walking through the Roman columns and ruined streets on a chilly windy day. Standing in the middle of the Forum, trying to get my bearings about being in the middle of so much history. I never really succeded at that for the entire trip, I think.


I don’t remember much of the modern city of Jerash. My guess is we just visited the Roman city. I am sure, at some point, the connection between the Gospel story of Jesus’ miracle, the possessed man, and the swine was brought up. But, like many other places I went during that trip, the full scriptural and spiritual significance of the location was not something that struck me.

It was only much later that I would really feel the spiritual effects of that trip. I am not saying I took that trip for granted. I definitely realized how fortunate I (a poor kid from Conway) to be roaming that part of the world when I was 19; I was constantly writing and thinking and dealing with the history and culture and all the newness that such a trip brings up. It still gives me pause, even as I write this. But I entered the trip with a particular attitude about God and Christ and Christianity in general that, while not hostile, was also not the most . . . um . . .  open.

But that’s really another post or 12. Right now, I will just remember and smile at my blessing of being able to do this trip at all.