Here continues the commentary track for Katja's Diary.  I have to increase the pace of my comments, as Risus Monkey is almost finished with the posting of his entries!

I am not sure why Risus Monkey had to miss the session when the Outsider's Aegis ventured back into Roth Farstrider's well, but he missed a doozy.  My notes on that session are very spotty, but I remember a running fight with the kobolds that led to an underground lake.  In that lake lived the kobold's "god" an underdark monstrosity I concocted based on the aboleth.  That monster itself was entirely too tough for the party at this level, so I stripped it down.  Even so, the adventure almost resulted in a TPK.  The aboleth would grab party members and drag them into the lake.  There was bull-rushing of both friends and foes into the water, as well as the kobold priest casting spells and other kobold sneakiness.  As I recall, there were only one or two party members left conscious (Bix was one, I think) and they actually had to spend the night in the caverns, waiting for Boaz to heal sufficiently enough to cast spells. 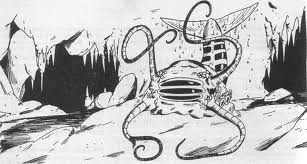 Upon the advice of Cthulhu's Librarian, I've scanned in Roth Farstrider's story and have posted it below.  Perhaps this is the convrsation Katja had while the others were almost getting killed down in the well.

The Story of Roth Farstrider

"I was born in a small village on the eastern edge of the Cimbrian Lands, past the dwarven realm of Thorindel, near the lands of the Einherjar. The village, called Fil'Thannath, was home to about 600 souls. Me family was the Lucullann's, a clan who had served the MacFinnan's from time out a mind. I used to wander about with Colbthach MacFinnan, the Lord's warden. "Twas he who taught me to use sword and bow.

I left Fil'Thannath after spending 19 winters there. Colbthach had formed a Fianna to hunt the orcs that had been raiding our lands for several winters. Colbthach, meself, two of Colbthach' s cousins, an Einherjar priest of Thor who called himself Vosguod, and a wizard from the White School named Rivello, set out north and west to hunt orcs.

For over five years we wandered, hunting orcs and other evil when we found it. We came to call ourselves the Wandering Swords, though Vosguod used a hammer and Rivello never picked up a blade in his life. Can't very well call yourself the Wandering Hammer's though. Sounds like a bunch of damned out of work blacksmiths.

Anyway, we did some good, I supposed. Killed a giant who called himself Kraggart. He was gathering an orc army and trying to set himself up as king or some nonsense. Colbthach's cousin, XXXXXX, was killed in that battle. That must have been over sixty years ago.

Not too long after the battle with Kraggart, the Wandering Swords disbanded. Rivello had some wizardly business to attend to, Colbthach wanted to settle down ... you know how it goes.

Vosgoud and I traveled together for a time after that, performing tasks his church would ask of him. We retrieved the Gauntlets of Siggda (a famous priest of Thor) from the white dragon Frostmarrow far to the north in Kelvalla. A band of warriors calling themselves the Dragonslayers helped us in that quest ...

After a few more years I was getting restless and I realized I was getting restless for a home, for a wife and children. I went back to Fil' Thannath, which had grown to a small city since I had left. I met and married Siobahn McShae, whose family was from Eastern Cimbria. She was a lovely woman, with fiery red hair and a beautiful voice. She sang like no other I've ever heard ...

Siobahn and I moved back to her family's lands, south of here in the lands of Connaught. We had a happy and quiet life. Our daughter, Laura, was born a few years after we moved back. She was a strong and fine lass, with hair just like her mother's and a temper to match.

We farmed a bit and I hunted and taught other's sons how to use a sword a shoot a bow. I taught Laura, too, though she seemed to have little taste for the wandering life. Suited me fine.

Siobahn was taken, along with many others, by the Plague of Ossuth when Laura was fifteen. Some say it was some cult of disease that let the plague loose. I was torn up, but Laura's strength helped me through it.

She fell in love about two years later with a young man named Ulster MacCormac. He was a good lad, strong and kind - not bad with a sword, but a fine singer himself. The two were married and moved to Ulster's family lands about Duma Cormac. They insisted I come with them. I was happy too.

We lived in peace for several years. Eammon was born a little over a year after they were married, Siobahn two years after that. I was happy to be a grandfather and to live a quiet life.

It was not to be, however, for the Frostwars Came. Orcs, giants, and worse came down from the mountains and Mydrall. They had been growing in power and fierceness since the dwarves fled their caverns and it finally boiled over, I guess. Although most of the fighting was to the west, the Cormac lands saw their share of raids and fighting. Ulster heeded the calling of the Cormac banners and went to fight orcs. Just doing what I would have done in his place, I suppose. He was killed driving the orcs out of the Grenwylde Pass, to the north and west of the Thoralien Forest. It broke Laura's heart. The Freezing Sickness took her two years later, about 25 years ago.

Eammon and Siobahn were fostered with Ulster's family, who offered to take me in as well. But I needed to wander again, to see trees and mountains. My sword arm had grown weaker, but I still had some skill with a bow, and knowledge of plants and tracking. I would wander for a time, then return to visit my grandchildren. During those wanderings I roamed about the Thoralien Forest and found it's strange and quiet ways to my liking. Ulster's brother, Rodhri, helped me build this modest house here about eight years ago, here on the edge of the forest. Eammon is away down south with The Rider's of Callas - he's a fine warrior. He stayed the winter with me, just past. A good lad, if maybe a bit headstrong. He's used some of the money he has earned from his travels to buy an inn in Duma Fafni. Siobahn is the other partner and runs it. It's called the White Rider. She does quite well, I think. No one is going to push her around, that's for sure. I was down there last summer for a bit, but the city is just too crowded for me these days. No, I am content to live out the rest of my days here at my cabin, for the most partprobably don't have too many days left anyway. I just like the quiet and the simple and don't need much excitement. Definitely do not need some aboleth-like creature in my well, anyways.