"How to Prepare" - -Mentzer Reflections, Part 15

This continues my series chronically a close examination of the Mentzer Basic Player's Manual.  My central thesis here is that Mentzer was tasked with creating a self-teaching system from the basic Moldvay rules.  In so doing, certain implicit or default assumptions about play were made into "rules."  Today's section certainly supports that thesis. 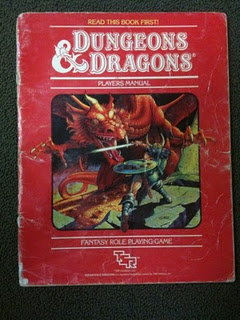 "How to Prepare" spans pages 53-55 of the Player's Manual.  It deals with player mechanics and roles around the table, speaking little of character abilities or rules.  It starts with what to read (the PM) and what to bring to the table.  Of course, the most important thing a player needs is a Dungeon Master!  Other than that, you need characters, dice, pencils, paper, and likely refreshments.  You may also need retainers if you only have two or three players.

Mentzer also urges the players to think about the characters a bit before play with some who, why, where, when, and what questions. This, to me, really signals a move toward less "disposable" characters.  Though character creation is still 3d6 in order, paying attention to this level of motivation prior to the first dungeon foray doesn't 100% fit with the 2 hit point fighter who will likely die in the first room.  It's a fine line to draw, as one wants more than just numbers on a page, but one also doesn't want to spend too much effort too early on when survival is very difficult.

The section also contains a rudimentary guide to tactics -- put the fighter up front and the magic user in the middle, let high CHA characters do the talking, etc.  I remember following these to a "T".

I found the sample method for dividing treasure, also included here, to be interesting, though I cannot recall ever using it.  Permanent magic items count as one share.  Temporary magic items count as 1/2 of a share.  Add coins up, divide into shares, pick/assign accordingly.  It's straightforward and simple, but we always just tried to get the magic items in the hands of those who could use them.  I don't really remember fighting about treasure that much, irnocally, until 3rd Edition.  But that was a player, not a system issue.

That aside, I see this section as laying out some ways to play the game that really influenced how I, as a player, played.  I'd wager it's the same for a fair amount of others.
Labels: BECMI Mentzer